The Open Systems Interconnect (OSI) model is a conceptual framework that describes networking or telecommunications systems as seven layers, each with its own function.

The layers help network pros visualize what is going on within their networks and can help network managers narrow down problems (is it a physical issue or something with the application?), as well as computer programmers (when developing an application, which other layers does it need to work with?). Tech vendors selling new products will often refer to the OSI model to help customers understand which layer their products work with or whether it works “across the stack”. 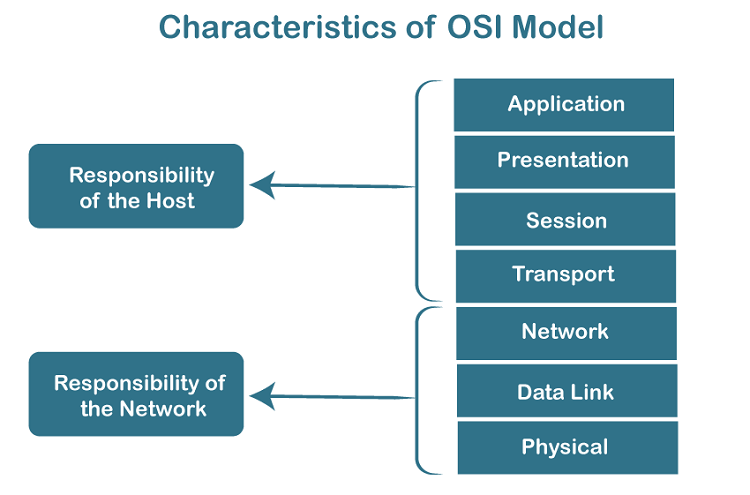 We’ll describe OSI layers “top down” from the application layer that directly serves the end user, down to the physical layer.

The Physical Layer, which represents the system’s electrical and physical representation, is at the bottom of our OSI model. This can range from the kind of connection used to the radio frequency connectivity (such as in a Wi-Fi network) to the pin arrangement, voltages, and other physical specifications. When a networking issue arises, a lot of networking experts jump directly to the physical layer to make sure that all the cables are connected correctly and, for example, that the router, switch, or computer’s power plug hasn’t been pulled.

Functions of a Physical layer:

The Data Link Layer provides node-to-node data transfer (between two directly connected nodes), and also handles error correction from the physical layer. Two sublayers exist here as well–the Media Access Control (MAC) layer and the Logical Link Control (LLC) layer. In the networking world, most switches operate at Layer 2. But it’s not that simple. Some switches also operate at Layer 3 in order to support virtual LANs that may span more than one switch subnet, which requires routing capabilities.

Functions of the Data-link layer

The network layer has two main functions. One is breaking up segments into network packets, and reassembling the packets on the receiving end. The other is routing packets by discovering the best path across a physical network. The network layer uses network addresses (typically Internet Protocol addresses) to route packets to a destination node.

The Transport Layer deals with the coordination of the data transfer between end systems and hosts. How much data to send, at what rate, where it goes, etc. The best known example of the Transport Layer is the Transmission Control Protocol (TCP), which is built on top of the Internet Protocol (IP), commonly known as TCP/IP. TCP and UDP port numbers work at Layer 4, while IP addresses work at Layer 3, the Network Layer.

The two protocols used in this layer are:

The session layer creates communication channels, called sessions, between devices. It is responsible for opening sessions, ensuring they remain open and functional while data is being transferred, and closing them when communication ends. The session layer can also set checkpoints during a data transfer—if the session is interrupted, devices can resume data transfer from the last checkpoint.

The area that is unrelated to data representation at the application layer is represented by the Presentation Layer. In general, it denotes the preparation, translation, or conversion of application format to network format or vice versa. To put it another way, the layer “presents” data to the network or the application. Data encryption and decryption for safe transmission is an excellent illustration of this; this takes place at Layer 6.

The OSI model’s Application Layer is the one that is “closest to the end user.” It displays incoming data to the user after directly receiving information from users. Amazingly, apps do not exist at the application layer themselves. Instead, in order to communicate with apps on the other end, the layer supports communication through lower layers. Examples of communications that rely on Layer 7 are TelNet and FTP, web browsers (such as Google Chrome, Firefox, Safari, etc.), and TelNet.

Usually, the Network Port concept is challenging to understand. In networking, it is a communication endpoint used to connect an external device to the computer. When there is a requirement to set up remote access for your IP Cameras, the network port comes into the picture. Routers are dependent on ports to route data to…

In the modern world, two devices are considered to be in a network if a process on one of them can exchange data with a process on the other. Nodes (a group of devices) or computers can connect to one another through networks. A network is made up of several computers, servers, and networking equipment…

Cybercriminals are always looking for the next network to attack. One tiny opportunity is all they need to strike. Network scanning comes in handy to protect your network from their antics. You can use data obtained from network scanning to tighten your cybersecurity as it allows you to identify active devices connected to your network…

Network scanning refers to the process of obtaining additional information and performing a more detailed reconnaissance based on the collected information in the footprinting phase. In this phase, a number of different procedures are used with the objective to identify hosts, ports, and services in the target network. The whole purpose is to identify vulnerabilities in…

TCP is a standard protocol to define the ways for creating and managing the connections between devices in a network for the exchange of packets of data. It maintains the connection to ensure that the data is exchanged between the devices.  This protocol also solves several challenges related to packet-based messaging. These challenges can be out-of-order…

UDP is an alternative to TCP. It is a communication protocol used for the exchange of data between the devices in a network. It is especially meant for the transmission of time-sensitive files. So, it transfers the data faster than TCP but is not as reliable as TCP.  To enable faster data transfer, it avoids…