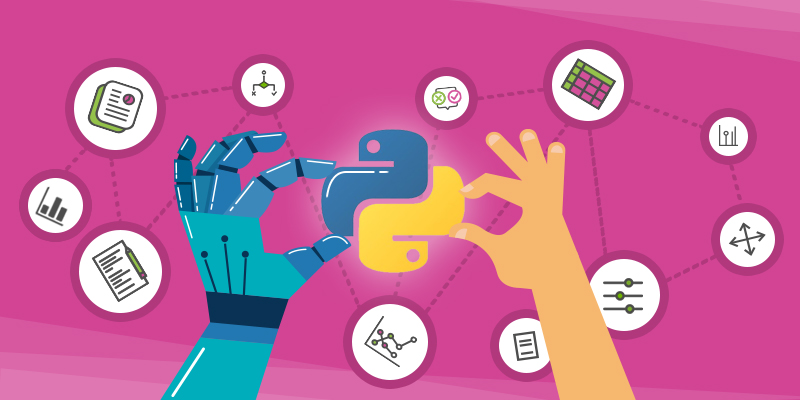 Python is a programming language with many characteristics, such as an intuitive syntax and powerful data structures, which can lead to efficient code. It’s no wonder that this, as well as experienced developers, are benefitting.

In the Python Basics section we will:

The most popular library for data science is NumPy. NumPy is a powerful library for numerical computations. It provides an efficient way to store and manipulate large arrays of data. NumPy also has functions for linear algebra, Fourier transforms, and random number generation.

Another popular library is pandas. pandas is a library for data analysis. It provides tools for reading and writing data, manipulating tabular data, and performing statistical analyses. pandas is built on top of NumPy and integrates well with other libraries in the scientific Python ecosystem.

SciPy is another widely used Python library for scientific computing. SciPy contains modules for optimization, linear algebra, integration, interpolation, and statistics. SciPy also has a wide variety of functions for working with images and signal processing.

scikit-learn is a machine learning library that includes a wide variety of algorithms for classification, regression, and clustering. scikit-learn is built on top of NumPy, SciPy, and matplotlib and integrates well with the rest of the scientific Python ecosystem.

As a data scientist, you will undoubtedly be working with loads of data on a daily basis. And what better way to manipulate, analyze, and gain insights from your data than using the Pandas library?

Pandas is a Python library that provides high-performance, easy-to-use data structures and data analysis tools. In particular, it offers data frames (similar to tables in R) and Series (one-dimensional arrays), which are the two fundamental data types in Pandas.

With Pandas, you can easily load and manipulate your data, perform statistical analysis, and even create visualizations! Not to mention, Pandas integrates well with other popular Python libraries such as NumPy and matplotlib, making it even more powerful.

So if you’re starting out in Python for data science or are simply looking to brush up on your skills, this guide is for you. We’ll cover all the basics of Pandas so that you can get up and running with using this essential Python library today.

Python is a high-level, interpreted, general-purpose programming language, created on December 3, 1989, by Guido van Rossum, with a design philosophy entitled, “There’s only one way to do it, and that’s why it works.”

In the Python language, that means explicit is better than implicit. It also gives rise to the infamous Python telegraph pole analogy attributed to creator Guido van Rossum, which goes like this:

There is beauty in π, elegance in an all-numeric telephone keypad . . . I am attracted to the simpleness of a perfect poker face, and the serenity of perfect punctuation mark placement. Just as art to be appreciated and not merely tolerated, comments to be enjoyed and not just scanned for errors.

Matplotlib is a Python plotting library which produces publication quality figures in a variety of hardcopy formats and interactive environments across platforms. Matplotlib can be used in Python scripts, the Python and IPython shell, the jupyter notebook, web application servers, and four graphical user interface toolkits.

With matplotlib, you need to create your own figure objects yourself because it’s not part of a GUI toolkit like Qt or Tkinter (it is however possible to access those libraries via PyQt4 or PyGTK).

Python’s Seaborn library is one of the most popular libraries for data visualization. It offers a wide range of features, including built-in datasets, aesthetic defaults, and tools for both statistical modeling and exploratory data analysis.

In this section, we’ll take a look at some of the most important concepts in Seaborn. We’ll start with a brief overview of the library, then move on to discussing some of its most important features. Finally, we’ll conclude with a few tips on using Seaborn effectively.

Whether you’re just getting started with data science or you’re a seasoned pro, it’s always important to keep your skills up to date. Python is a powerful tool for data science, and learning the language can help you be more successful in your career. In this article, we’ve covered five key concepts that every data scientist should know about Python. We hope you found this information helpful and that you’ll start using Python in your data science projects today! You’re embarking on your journey into data science, and everyone you ask recommends that you start with learning how to code. You decide on Python, but are now paralyzed by the large piles of learning resources available. In this guide, we will walk you through the best programming books, courses, tutorials and more to teach…