PKI (public key infrastructure) is the underlying framework that enables entities — users and servers — to securely exchange information using digital certificates. The entities that facilitate and use PKI typically involve general internet users, web clients or browsers, and company servers — though this can extend to other virtual machines (VMs) as well.

The word infrastructure describes PKIs since it does not refer to one single physical entity. Instead, it refers to the components used to encrypt data and authenticate digital certificates. These components include the hardware, software, policies, procedures and entities needed to safely distribute, verify and revoke certificates.

In technical terms, PKI is a two-key asymmetric cryptosystem that supports various information technology (IT) systems in their pursuit of high-level information confidentiality, encryption and confidence. The two keys, in this case, are also the two main pieces that facilitate this secure data management: a public key and a private key.

Similar to real keys, digital keys can lock and unlock digital materials. Lock in this context refers to encryption. Digital information is jumbled through the process of encryption to keep it safe from unauthorized viewers. Users can lock and unlock data at will using a key. Keys are special in that they can be used by multiple people at once. One could decipher another person’s encrypted data and messages if they had access to their digital key. To maintain the security of the parties and data involved, PKI uses two digital keys.

Managing Keys in the Cryptosystem:

The security of a cryptosystem relies on its keys. Thus, it is important that we have a solid key management system in place.  The  3 main areas of key management are as follows: 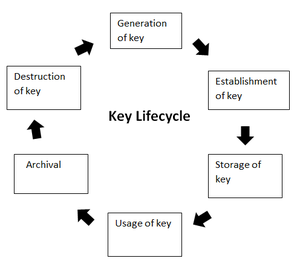 PKI or public key infrastructure aims at achieving the assurance of public key.

Public key infrastructure affirms the usage of a public key. PKI identifies a public key along with its purpose. It usually consists of the following components:

Working on a PKI:

Let us understand the working of PKI in steps.

Classes of a Digital Certificate:

A digital certificate can be divided into four broad categories. These are :

Process of creation of certificate:

The creation of a certificate takes place as follows:

Each CA has its own certificate. Thus, trust is built hierarchically where one CA issues certificates to other CAs. Moreover, there is a root certificate that is self-signed. For a root CA, the issuer and the subject are not two separate parties but a single party.

The root CA is the ultimate authority, as you can see above. Therefore, the security of the root CA is crucial. A catastrophe could occur if a root CA’s private key is not handled properly. This is due to the fact that anyone can then issue certificates by masquerading as the root CA. A root CA must be offline 99.9% of the time to comply with security requirements. To generate public and private keys and to issue fresh certificates, it must be brought online. Ideally, these tasks ought to be carried out 2-4 times a year.

Use of PKI in Today’s Digital Age:

There are a huge variety of apps today that need authentication. Numerous locations require certifications. Without a public key infrastructure, this is impossible. Depending on the use case and requirements, PKI’s significance has changed over time. This is a clip from that track.

Challenges that a PKI Solves:

PKI owes its popularity to the various problems its solves. Some use cases of PKI are:

Other than these, one of the most important use cases of PKI is based around IoT(Internet of Things). Here are two industries that are using PKI for IoT devices:

Motives, Goals, and Objectives of Information Security Attacks Attacks = Motive (Goal) + Method + Vulnerability Windows XP and Flash are common Vulnerabilities A motive originates out of the notion that the target system stores or processes something valuable and this leads to threat of an attack on the system. Attackers try various tools and attack techniques to exploit vulnerabilities in a computer…

An Intrusion Detection System (IDS) is a system that monitors network traffic for suspicious activity and issues alerts when such activity is discovered. It is a software application that scans a network or a system for the harmful activity or policy breaching. Any malicious venture or violation is normally reported either to an administrator or collected centrally using a…

A sniffer is a program or a device that eavesdrops on the network traffic by grabbing information traveling over a network. Sniffers basically are “Data Interception” technology. In packet-switched networks, the data to be transmitted is broken down into several packets. These packets are reassembled once all the data packets reach their intended destination. When…

Extracting Plaintext Passwords by Dumping and Cracking SAM Hashes Security Account Manager (SAM) is a database file which includes user accounts and security descriptors of users. This file stays on the Windows systems. The passwords in this file are saved in hashed format for better security. When hackers attack a system, they usually dump the OS…

The practice is essential for mastery of an art. Hacking is mostly an art since it’s more about how you use the tools you know and less about how many tools you know. While it might be easy to get a basic idea of what a certain technique is about during introductory phases, getting comfortable…