In the event of an emergency, the firewall is used as a wall to block the fires. A network firewall is used to set a barrier between the internet and LAN (local area network). The purpose of a network firewall is to protect our private LAN. It is used to save our important data from leaking out. Without the firewall capability, the routers will blindly pass traffic between two different networks. A firewall is used to monitor the traffic and block the traffic, which is not authorized to go out. A network firewall separates the internet and the LAN. In the LAN, it also segments the ordinary data and the important data. Due to this, the internal invasion can be avoided. You will determine the amount of threats that are blocked by your firewall. By blocking, firewall prevents your private network from outside users. You need to create a Demilitarized Zone (DMZ) if you allow remote access from others to your network. Most of the firewall provided the DMZ option. It will designate a directory on the computer of a gateway, just like Demilitarized Zone. Virus protected is offered by some firewalls. It is recommended for every computer to install the anti-virus. 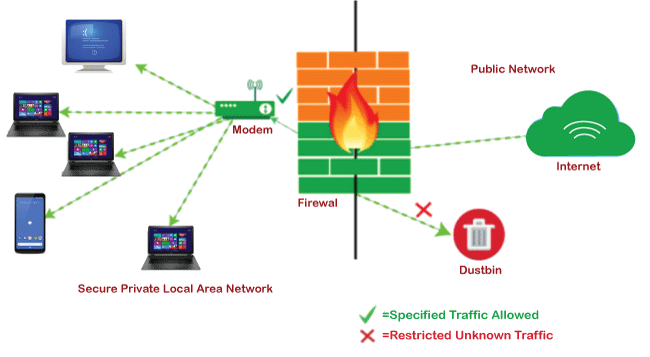 Some hardware firewalls allow you to define the blocking rules like UDP (User diagram protocol) or TCP (transmission control protocol) or by IP address. This helps you to forbidden the IP address and unwanted ports. Software applications and services define some other type of firewall. Such firewall acts like a proxy server, which is used to interconnect the two separate networks. The combination of a software firewall and a hardware firewall is more efficient and safer.

Security features of the firewall

How Does a Firewall Work?

As mentioned previously, firewalls filter the network traffic within a private network. It analyses which traffic should be allowed or restricted based on a set of rules. Think of the firewall like a gatekeeper at your computer’s entry point which only allows trusted sources, or IP addresses, to enter your network.

Only incoming traffic that has been set up to be accepted by the firewall is accepted. Based on previously set security criteria, it distinguishes between legitimate and malicious communication and either permits or bans particular data packets.

These rules are based on several aspects indicated by the packet data, like their source, destination, content, and so on. They block traffic coming from suspicious sources to prevent cyberattacks.

For example, the image depicted below shows how a firewall allows good traffic to pass to the user’s private network.

However, in the example below, the firewall blocks malicious traffic from entering the private network, thereby protecting the user’s network from being susceptible to a cyberattack.

This way, a firewall carries out quick assessments to detect malware and other suspicious activities.

Enumeration is fundamentally checking. An attacker sets up a functioning associated with the objective host. The weaknesses are then tallied and evaluated. It is done mostly to look for assaults and dangers to the objective framework. Enumeration is utilized to gather usernames, hostname, IP addresses, passwords, arrangements, and so on. At the point when a…

Wireless networks have become an integral part of how we conduct our businesses. They ease many processes and help us get rid of the clutter caused by hundreds of wires yet keeping wireless networks safe poses some challenges. Wireless technologies provide practical answers to our demands. They remove us from the mess generated by wires and…

Any computer that connects to an internet connection is vulnerable to attacks. Some computers can be more vulnerable than the other. In order for protecting against them there must be a system that should act as a gateway between the user and the internet.  In this article, I will be illustrating the Advantages and Disadvantages…