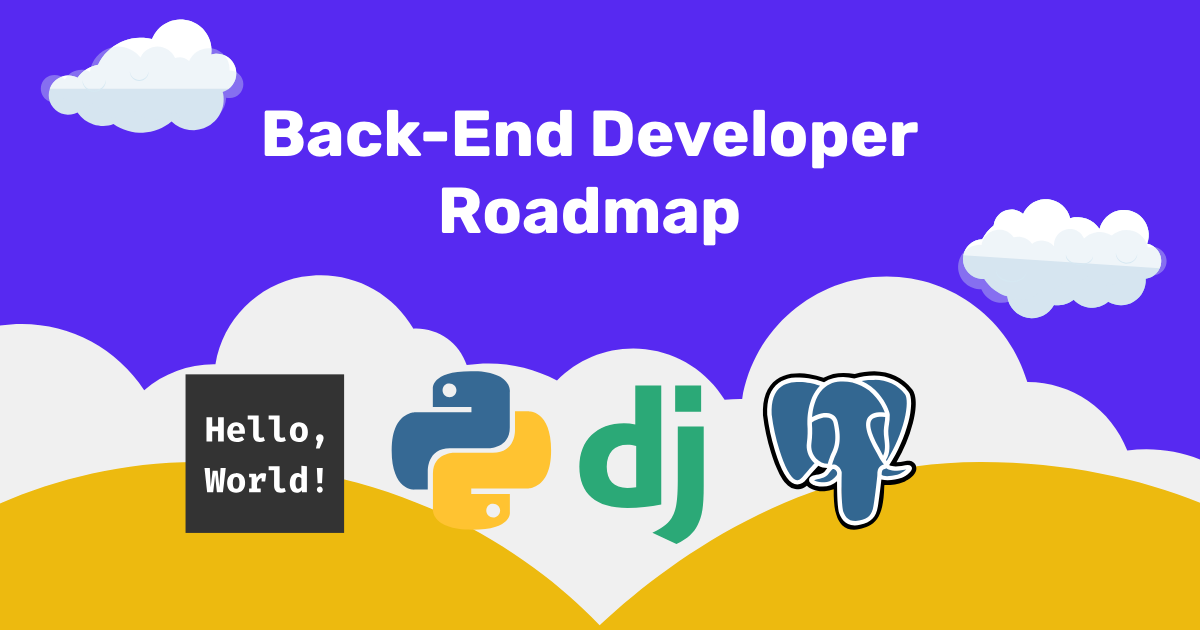 If you’re reading this, it’s safe to assume that you’re interested in becoming a backend developer. And if that’s the case, then you’re in the right place. In this article, we’ll be taking a comprehensive look at the backend developer roadmap. We’ll cover everything from the required skills and training to the most popular backend frameworks and tools. So, whether you’re just starting out on your backend development journey or you’re looking to stay up-to-date with the latest trends, this guide is for you.

What is Backend Development?

Backend development refers to the server-side of web application development. It is responsible for managing the data and logic of the application, and ensuring that the front-end (client-side) can access this data.

The backend is typically written in a server-side scripting language like PHP, Ruby on Rails, or Python. The data is stored in a database, which can be MySQL, MongoDB, or any other type of database.

The backend developer must have a strong understanding of how the front-end works in order to ensure that the two sides are working well together. They must also be able to design and implement APIs that will be used by the front-end to access the data.

Who is a Backend Developer?

A backend developer is a software engineer who specializes in the back end of web development. They are responsible for the server-side of web applications and often work with databases, APIs, and architecture. Backend developers usually have a strong understanding of front-end technologies (such as HTML, CSS, and JavaScript), but their focus is on the back end.

As a backend developer, you will need to have a solid understanding of the basic workings of the internet, as well as common operating systems and frontend technologies.

The internet is a global network of interconnected computers and devices that enables communication and data exchange. It is made up of many different types of hardware and software, including servers, routers, and switches.

Operating systems are the software that manage all of the hardware and software resources on a computer or device. Common examples include Microsoft Windows, macOS, Linux, and Android.

Frontend technologies are the tools and programming languages used to create the user interface and interactivity for websites and applications. Common examples include HTML, CSS, JavaScript, React, and Vue.

If you want to become a backend developer, you need to learn at least one programming language. But which one should you choose?

There are many languages to choose from, but some of the most popular for backend development are PHP, Java, Python, and Ruby. All of these languages have their own pros and cons, so it’s important to do your research before deciding which one is right for you.

Once you’ve chosen a language, it’s time to start learning! There are plenty of resources out there to help you get started, including books, online courses, and tutorials. Just make sure you’re using reliable sources so that you can be confident in your skills.

Once you feel comfortable with the basics of your chosen language, it’s time to start practicing by building small projects. This will not only help you solidify your understanding of the language but also give you a chance to practice your problem-solving skills. As you build more projects, you can gradually increase the complexity until you’re confident enough to tackle real-world problems.

A version control system (VCS) is a software that allows users to track changes to files and coordinate work on those files among multiple people. A VCS is usually used by software developers to manage source code, but it can be used for other types of files as well.

Git is a very powerful tool, but it can be confusing for beginners. If you are just starting out, it might be a good idea to use a simpler VCS such as Subversion or Mercurial. Once you are more comfortable with version control, you can try using Git.

In general, a VCS allows you to:

Databases are used by backend developers to store and retrieve data. They are often used in conjunction with web applications to provide a way for users to interact with the data. For example, a user might fill out a form on a website that adds their contact information to a database.

An Application Programming Interface (API) is a set of subroutine definitions, communication protocols, and tools for building software. A good API makes it easier to develop a program by providing all the building blocks, which are then put together by the programmer.

A well-designed API is often very easy to learn and use, making it ideal for developers who are new to the platform. It also enables experienced developers to get started quickly and easily.

There are two types of APIs: those that allow access to the underlying operating system or hardware, and those that provide access to specific application functionality.

The most popular type of API is the web-based API, which allows developers to interact with web-based applications using standard protocols such as HTTP or HTTPS.

Caching is the process of hoarding a copy of a resource in a cache form, that is, a temporary storage location, and bringing it forth quickly whenever requested. The main goal of caching is to increase the performance of data retrieval while minimizing the need to obtain the underlying hoarding layer, which is very slow to process.

The caching techniques and tools that one should be aware of are:

The testing methods used by backend developers are:

Code analysis is the process of debugging and evaluating the codes to make sure they perform smoothly.

Some of the most extensively used code analysis tools are- SonarLint, JUnit, JaCoCo, PMD, SonarQube, Qualys, and Jenkins.

The architectural patterns are a reclaimable output of the repeating problems that occur while developing software.

A few of the most often used architectural patterns are- Monolithic, SOA, Microservices, CQRS, Event Sourcing, and Serverless.

You can choose to learn to use any of these message brokers to use in your client projects—RabbitMQ, Kafka, Kinesis, or JBOSS messaging.

The backend developer roadmap is the packaging of the software code with all the important features like frameworks and libraries to make the services distinct from each other in a container.

In the backend developer roadmap, design patterns are seen as an elaborated solution to problems that might occur during web application development. It is a standard approach for constant problems.

Some of the design patterns that, as a backend developer, you should definitely know about are:

As the name implies, authentication methods are utilized to verify the identity of a user or a device that wants to avail of the resources, data, or application. This authentication phase offers a user identity to the security system.

A webhook is a reverse API process where an application offers real-time information to other applications.

Unlike the general APIs, Webhooks don’t need a request followed by a response. Instead, Webhooks send the information whenever available without requests or custom callbacks.

This webhook feature makes it efficient for users and service providers.

It is also an API, but the advanced one makes it possible to open a two-way interactive communication session between the end user’s browser and a server.

With the web-socket API, one can send messages to the server and receive an event-driven response without polling the server for a reply.

A WebSocket is often seen as a continued connection between the client and the server. It is a lightweight layer over TCP/IP, making it suitable for using sub-protocols to lodge different messages.

As a backend developer, you need to be proficient in working with a variety of real-world applications. This means being able to understand the requirements of the application, designing the necessary database structures, and developing the code that will power the application.

There are a few different ways that you can practice working with real-world applications. One way is to find open source projects that you can contribute to. This will give you valuable experience in working with other developers on a project, as well as giving you something to put on your resume.

Whatever method you choose, practicing with real-world applications is essential for becoming a successful backend developer.

A backend developer is responsible for the server-side of web applications. They ensure that data is correctly stored and retrieved from the database, and that the application runs smoothly.

If you want to become a backend developer, you will need to:

As a backend developer, you are responsible for the server-side of web applications. You will need to have a strong understanding of algorithms, data structures, and software design principles. In addition, you should be proficient in at least one programming language and have experience with relational databases.

The most important thing to remember as a backend developer is that your goal is to create scalable and efficient web applications. To do this, you must be able to write clean and well-organized code. Additionally, you should be able to work well with others on a team and have good communication skills.

A SQL injection is a technique that attackers use to gain unauthorized access to a web application database by adding a string of malicious code to a database query. A SQL injection (SQLi) manipulates SQL code to provide access to protected resources, such as sensitive data, or execute malicious SQL statements. When executed correctly, a SQL injection…

Vistaprint is a popular online printing service that offers high-quality printing at an affordable price. But what about their professional services? In this Vistaprint Pro Advantage review, we’ll take a close look at their offerings for businesses and see if they’re worth the investment. We’ll cover topics like print quality, customer service, turnaround time, and…

JavaScript is a programming language that is vastly used in the world both on the client-side as well as server-side that allows you to make web pages convertible and create dynamic web content. It’s a scripting language that allows programmers to create interactive user interfaces with dynamic content. While CSS and HTML are the languages…